Solar panel efficiency has been a subject of intense interest since the turn of the century. The first solar panel achieved an efficiency of about 6 percent. This was a major breakthrough in science as we rolled out our first commercial photovoltaic device in history. After the successful use of solar panels on spacecrafts, interest and research on solar panels intensified. Plans were made and approvals were given — funds poured in. Improvements came in rapid bursts, bringing the efficiency of commercial solar panels to about 20 percent. In less than 60 years, we more than doubled photovoltaic efficiency.

Currently there are solar panels that boast 30 percent efficiency. These are specially doped triple junction cells that began its development as dual junction cells. However these phenomenons are largely confined within the laboratory and engineers are still unable to produce such solar panels in large quantities without charging consumers an arm and a leg for it. More work remains to be done before common retailers stock up solar panels endowed with this technology.

In practical there is nothing much we as consumers can do about technology. Yet the little we do to ensure our solar panels achieve its maximum potential really goes a long way — especially since solar panels are designed to last us for a few decades.

The most important thing we can ensure is to install our solar panels in the right orientation and tilt angle. The optimal position helps photovoltaic panels receive the most sunshine throughout the day and across different seasons of the year. This helps reduce the payback period. If you are living in the northern hemisphere (like most of us do), then you’ll need to orientate your solar panels toward true south (as opposed to magnetic south). You’ll also need to tilt them according to the latitude of your installation site. The correct installation position will allow your solar panels to be exposed to direct, unobstructed sunshine from 9am to 3pm everyday.

Many homeowners underestimate the adverse effect that shading has on their solar panels. Even if only one solar cell is shaded, its entire solar generator’s power output can be dramatically reduced. The individual solar cell that is now shaded acts as a resister that drains the electricity generated by its neighbors. As resistance increases, power reduces.

Another seemingly minor event that reduces solar panel efficiency is the accumulation of dust on the glass surface. This dissipates sunlight that would otherwise reach photovoltaic cells for power generation. Since dust and dirt will inevitably collect, the only solution is to wash the glass surface regularly. If you’re living in a relatively dust-free environment, this should be an infrequent activity.

Temperature also affects solar panel efficiency. The higher the temperature, the further its efficiency drops. Unfortunately more heat is collected as solar panels experience more sunshine. Thus efficiency tends to taper as sunlight intensity increases. Therefore we have to ensure that our solar panels are installed sufficiently far away from roof shingles. The gap in between the roof and solar panels also allow air movement to bring away additional heat that may otherwise be trapped there….More at Solar Panel Efficiency 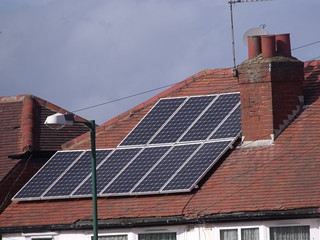